The Free Software Foundation is petitioning Microsoft to open-source Windows 7. That sounds crazy. Until you really think about it.

If you follow the source link below you will be taken to the MajorGeeks site where there are instructions on how to upgrade to Windows 10 using a Powershell Script or manually. The manual option may be the way to go for home users. Appears this has been developed by MajorGeeks; but, not tested here at “What’s On My PC”… That is not to say this will not work. MajorGeeks is a very reputable software distribution site and if I needed to upgrade, I would give this a try. Just back up your personal files…

Source: Download How to Update From Windows 7 & 8 to Windows 10 for Free – MajorGeeks

Here at “What’s On My PC” I know that change for people, especially in the world of computers and technology, can be stressful for people. Change can be good and sometimes change just needs to happen so that we can move to the next level. Today I found an article at “TheWindowsClub” that will assist those folks who may have recently transitioned from Windows 7 to Windows 10 due to the “end of life” support of Windows 7. This guide will definitely help you out and get you started with navigating around Windows 10. Thank you to “TheWindowsClub” for posting this helpful information. If you click on the source link below, “TheWindowsClub” will walk you through on how to get the “Quick Start Guide to Windows 10”.

Microsoft has released a guide on Windows 10, which is extremely useful if you new to Windows 10 or have just migrated from Windows 7 after the End of Support. If you fall into this category, then there is a lot that has changed, and you should not miss the guide. Microsoft has covered the fundamental topics to help get you up and running on Windows 10 without much hassle.

Windows 7 end of life lands on January 14, 2020. After that deadline, Windows users running older versions of the desktop operating system will face a difficult choice – cough-up for a hefty bill to upgrade to Windows 10, or brace themselves for some dangerous risks on their home PC.

What to do after Windows 7 support ends At this point, you have several choices: Ignore the deadline, including the popup warnings you’ve probably already received. Buy a new copy of Windows 10 ($140 from Microsoft), and install it. Hope that the free upgrade loophole still exists. Buy a new Windows 10 PC and migrate your existing files over to the new machine. Note that these options also apply to Windows 8.1, whose support ends in 2023.

When Windows 7 reaches end of support on January 14, 2020, your computer will still function but Microsoft will no longer provide the following: Technical support for any issues Software updates Security updates or fixes

The January 15 full-screen warning will tell users that their PCs are more vulnerable to viruses and malware due to no security updates, no software updates and no tech support. It will say that “Microsoft strongly recommends using Windows 10 on a new PC for the latest security features and protection against malicious software.”

The community of My Digital Life, an online tech support forum, has found a way to bypass Microsoft’s restrictions and allow the installation of Windows 7 Extended Security Updates on all systems, and not just those who paid Microsoft’s fee.

Windows 7 had a set of nice, beautiful games including the classic card games with new shiny graphics and some great new games from Vista like Chess Titans, Mahjong Titans and Purble Place. For some reason, Microsoft decided to discontinue these games and offers bloated Modern games from the Store instead. For fans of the original Windows 7 games, here is a simple tutorial to revive them on Windows 10.

Source: Get Windows 7 games for Windows 10

I have been receiving calls from folks that have Windows 7 based computers at home that they are now receiving a Windows 7 EOL (end-of-life) message from Microsoft, on their computer screen, advising them to either upgrade to Windows 10 or buy a new computer. Windows 7 is due to reach EOL on 14 January 2020. What that means is that the computer and Windows 7 will continue to run as it always has; BUT, you will receive no more bug-fixes, security patches or new functionality support, leaving you significantly more susceptible to malware attacks. Windows 7 is probably the best OS that Microsoft ever built, but it is time to send Windows 7 to the afterlife. For you folks at home, either upgrade or consider buying a new computer. If you decide to upgrade and need a starting point for this – CLICK HERE. Just make sure you have a migration plan, that you backup your personal files and make sure that your computer hardware can handle Windows 10. If you want a starting point to buy a new PC – CLICK HERE.

Several high profile Android apps still have vulnerabilities discovered years ago (Messenger, Instagram, and WeChat are among hundreds of unpatched apps); In a 4-3 ruling, justices from Pennsylvania’s highest court overturned a lower-court order that required the suspect in a child-pornography case to turn over a 64-character password to his computer; AND, Users have been warned not to download a fake Windows 10 update which is actually packed with malware. 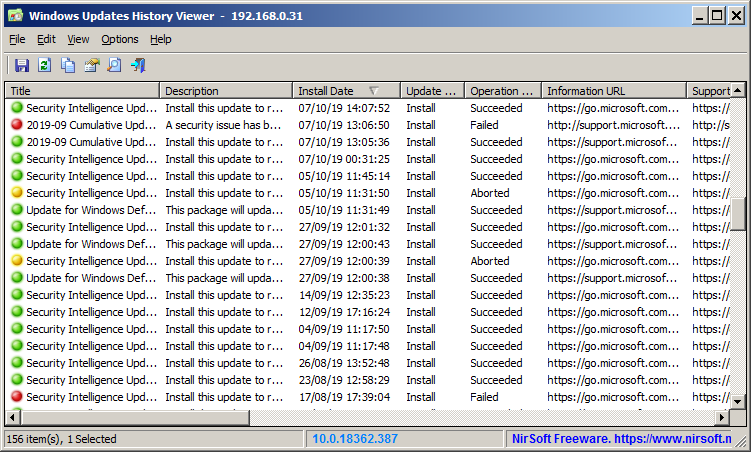 Post-it – Capture more than 200 individual square Post-it® Notes at a time with your camera. Draw, erase, type and change the color of your notes using powerful editing tools. Organize your way—group your ideas by thought or simply organize on a grid. Combine boards—collect and combine ideas from across multiple sessions. Share to your favorites—supports PowerPoint, Excel, PDF, Dropbox, and more. How to Cast from Firefox to Roku – There are many things you can do on your Roku device. For example, you can send videos from Firefox to your Roku. This is useful for people who are on their phones a lot, but they want to view videos on a large screen.

Save up to 30% on Ztotopcase iPad Cases and iPhone Cases

Thank you for visiting
‘What’s On My PC‘

All software products have a lifecycle. “End of support” refers to the date when the software vendor will no longer provide automatic fixes, updates, or online technical assistance. [2] For more information on end of support for Microsoft products see the Microsoft End of Support FAQ. Systems running Windows 7 and Windows Server 2008 R2 will continue to work at their current capacity even after support ends on January 14, 2020. However, using unsupported software may increase the likelihood of malware and other security threats. Mission and business functions supported by systems running Windows 7 and Windows Server 2008 R2 could experience negative consequences resulting from unpatched vulnerabilities and software bugs. These negative consequences could include the loss of confidentiality, integrity, and availability of data, system resources, and business assets.

The Cybersecurity and Infrastructure Security Agency (CISA) encourages users and organizations to: Upgrade to a newer operating system. Identify affected devices to determine breadth of the problem and assess risk of not upgrading.  Establish and execute a plan to systematically migrate

With the end of Windows 7 approaching, what can users do? They can keep using the operating system but it will become a dicey proposition – unless they start paying for support. “Windows 7 will continue to run but Microsoft won’t issue any more free updates for it, including security patches,” Converge360’s Mackie said. That could make Windows 7 PCs extremely vulnerable. “Once flaws in Windows 7 are publicly known, they are frequently used for attacks. After the January 2020 date, though, Microsoft likely won’t fix these vulnerabilities for most users,” he added.

Source: Microsoft is finally pulling the plug on Windows 7: How to save yourself | Fox News

Windows 7 support ends about nine months from now, on January 14, 2020—and if you’re a Windows 7 user, you’ll see more than this story reminding you of that date. In fact, according to Microsoft, you could see several pop-up reminders warning you to upgrade to Windows 10 before the year is out.

Source: Windows 7 will use pop-ups to warn users of the operating system’s impending death | PCWorld