I recently activated the Linux (Debian) OS feature on my Chromebook so that I could install the Linux version of Vivaldi (the Chromium based web browser). I am also thinking of installing the Linux version of LibreOffice, as well. I have been doing computers for many years and the Linux platform I am aware of, but never took the plunge. As a result of not taking that plunge, I had to learn a few commands to run from the Linux terminal window, on my Chromebook, in order to install and update the Linux software on my Chromebook. If there is anything else I need to know, feel free to comment or if there is something here I have posted that is incorrect, definitely let me know. 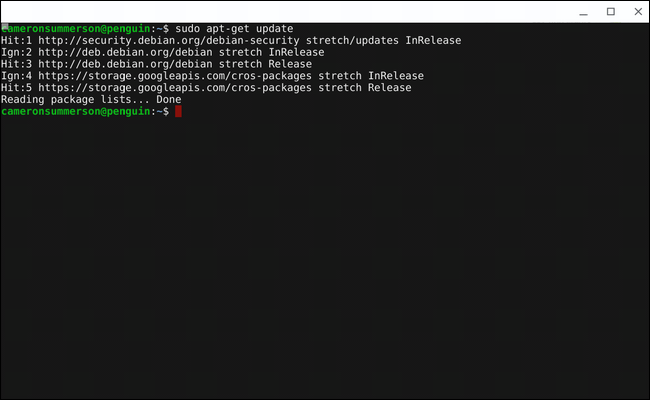 To get to terminal window on Chromebook:

You can use the [SEARCH KEY] and then start typing Term… for the Linux Terminal app appear.

The apt-get update command will check your Linux files for any updates or patches. Note that you’ll have to first type sudo, which stands for “super user, do”, i.e.; you’re essentially running the command as an administrator.

Once the update completes, you can then install software. Say, for instance, you want to install the GIMP image editor.

For that, issue the command: sudo apt-get install gimp -y

To uninstall Linux software on Chromebook:

Locate the Linux app you want to uninstall on the Chromebook in the launcher. Right mouse click and select “uninstall”.

Various commands that can be run from the command line:

You often don’t have to type the full name of a file or folder; just type the first few letters and hit the Tab key on your keyboard for auto-completion. I typed cd Do and hit Tab in the above case.

Go back from current directory (or folder) = cd ..